Grökus entered the world of electronic dance music in his hometown Dresden in the late 90s. On events like „boundless" and „various styles" on Dresdens infamous party hotspot Straße E he absorbed the soundscapes and the atmosphere of electronic underground music like House, Techno and Drum ´n Bass. In the beginning he was just a listener, a party-goer, a dancer - copying re-entry stamps by hand to access expensive events constrained by a tight budget. Everything changed in 2003 when Grökus and his pal purchased a bunch of cheap records on eBay. Now they had to go for it! His friend managed to get a pair of dusty 1210s and a mixer. There was no holding back anymore.

Nowadays, after more than 14 years in the scene / digging records of diverse genres / influenced by various cities he lived in and people he met / playing records at clubs and bars all over Germany / Grökus is running his monthly afterwork club series „Locomotion" at one of the most beautiful bar/club in Dresden named Altes Wettbüro.

The location has a loungy nature, there are no boundaries of genres for him and his special guests. Acting on the maxima of Laurent Garniers and Jeff Mills „Expect the Unexpected", DJs have the freedom to play music they probably wouldn't play in a club. It's not unusual to hear a mix spanning from Folk, Krautrock and Berlin-School to Cosmic, obscure Disco and Synth-pop and up to Deep House and Detroit Techno. Beside his own project „Locomotion" he is also part of the DAVE-Festival, the biggest annual event for electronic music and audio visual experiences in Dresden. 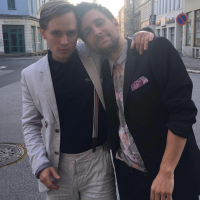