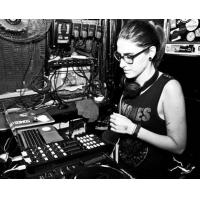 Born and raised in Buenos Aires, Vicky Sand is one of the latest artist to break out of the local underground scene. Having always had a strong interest in music it wasn't until the age of 15 when Sand was captivated by electronic music and aroused her interest in making her own. Fascinated by the minimal techno sound she sought out Brian Gros( Argentinian Dj and producer) and began producing under his tutelage.

Not being satisfied with producing Sand began to get into mixing sound Live and began playing in clubs all over Buenos Aires and the Atlantic coast.

With releases with Privilege BA Records,TeQwave Records and Low Clinic, she quickly began to make her mark in the local scene.

She has shared the bill with artist like Ian Cris, Insect Elektrika (Martin Vodicka) Hernan Bass, Jorge Ciccioli, Brian Gros, Michel Lauriola and other local artists. She is involved in Low, local nightlife cycle , alongside Krad Records and her list of accomplishments is rapidly growing.