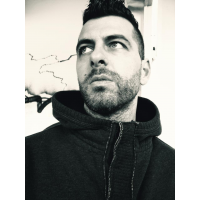 Berlin based Dj Producer, fascinated by techno and house music and raised in a musical family, Luigi Rossi began DJ'ing at the age of 14, spinning records at abandoned warehouse parties.

In 1999 he moved to the centre of Italy where he started out spinning in local clubs around Rome before moving up country where he played in many clubs around the north.

Some years later, he started to play in Ibiza's villa parties and in 2008, he created his first own party on the Balearic island whilst playing regular gigs at Island hot- spots like: Delano, Bora Bora, Blu, Es Paradis, Kiss, Grial, Es Vive, Somni and many more.

Summer 2010 saw Luigi Rossi under the pseudonym of "DG Star" exploding onto the Ibiza clubbing scene, playing at "Privilege world's biggest club" for their Wednesday parties Warung ( Promoted by the famous Warung Brazil ), and playing warm up sets at the notable beach clubs Bora Bora, La Plage, Delano as well as many others.

Following his underground passion, in late summer 2010, he created a new underground party called "Ice Cubes" which blew the roof off the famous "Blu Ibiza", a club which hosts famous DJs like Sven Väth, Tobi Neumann and Loco Dice to name a few, a party which later moved to various other clubs, one of which being the famous ROW 14 in Barcelona.

In March 2011, Luigi aka DG Star released "Speaking of love", his first track in collaboration with Monkey1 on "Freaky Vibes Records". Out again on vinyl with a new remix in June 2011, "Speaking of love" was 13th in the decks.de minimal chart.

In Summer 2011, back in Ibiza he start a new monthly event at the infamous "Sankeys Ibiza" where he plays also regular gigs

2012 he moved to Berlin and fully inspired by the city he came out with a completely new concept!
"Together in the dark" which is being hosted every week in various web radios as radioshow and in many clubs as Tour event already hosted in countries like Russia, Hungary, Spain, Germany and more.