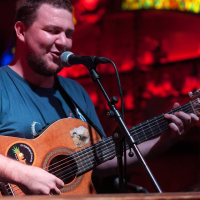 Adventurer and Multi-instrumentalist Eddy Allen is constantly on his world tour. The past years Eddy has performed all around in Europe, and in Central and North America. His tour plan is simple: going with the flow, wherever it’ll take him. Eddy’s style of playing displays how he has immersed himself into different scenes and cultures. The songs he has composed for years, and playing with musicians from around the world have given Eddy the musical edge and experience that evolved into his unique style. Along his journey he has created an international collective/band CCTV Allstars. In his solo shows Eddy loops the guitar, vocals and drums with a ”boss RC 30 loop pedal”, creating a modern antidote to a one man band. He performs songs that he has composed along his travels, welcoming the listener on a trip around the world of music and culture.