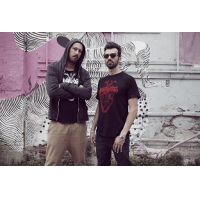 Ackeejuice Rockers is the name of the project born in 2007, that brings in a very clever way, the fusion between electronic music and dancehall.

This project came from the brilliant minds of DJ King P and Ali Selecta, two young and promising Italian dj’s with more than 10 years of experience in the scene. The mix created by warm sounds of hip hop music and synthetic sounds of electro is the starting point from where Ackeejuice got inspired.

King P’s background comes from the 90’s hip hop scene, and its scratch, its crews and battles. From 2002 to 2006 he was into his own reggae project called ‘King P Sound’, that will bring him to stages with some of the major exponents of the Italian and European reggae scene. He already has 4 mix cds distributed in the Italian territory, one of those produced with Esa a.k.a. El Prez, who has lately collaborated with Ackeejuice Rockers as well.

Ali Selecta decided to start his experience into the music world in 2007, proposing him self as dj in jazz pubs of the area. His sessions were about soul, playing European niche artists, exploring difficult sounds but definitely magnetic. His versatility in his session and his constant research brought him to play in the best clubs of the north-east of Italy. From soul to hip hop, the bpms started to ease in with more and more sycophantic beats.