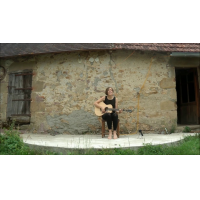 Zoe Hayter is a young English-Czech folk-rock singer-songwriter and busker. At a very young age she met an Irish songwriter Glen Hansard who helped her find the way to music. After that she started playing on the streets and in front of public in France and in 2015 she put together an indie-rock band called Her English Blood that was based in Prague. In the spring of 2017 her band released their debut album Only Breathing which was launched at one of their gigs in Prague by Zoe’s great friend Glen. Now Zoe plays her gigs solo or with her new backing band. During the summer 2017 she supported Glen at one of his solo gigs in an Irish town called Cootehill. You can find her playing on the streets of Prague now or playing concerts in Czech Republic and all around the world!