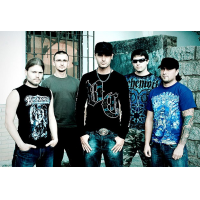 Action was founded in 1998 in Teplice, Czech rep. After year and half practicing started playing shows. They played a classical NYHC during that time like Madball or Ryker’s. In the end of year 2000 they put out D.I.Y. Mcd Action - tphc. After some time they added more metallic riffs and in 2002 they recorded new material and the Mcd was out on DEADBUTCHER rec. - ACTION- can evil be beautiful…? After that ACTION toured for 10 days countries like: Germany, Poland, Slovakia, Hungary. They have stand up and raised their flag to show the hardcore scene their uncompromising heavy sound!! The MCD is now completely sold out!!! Action played numerous shows with smaller bands as well as countless shows with heavyweights like Maroon, Hatebreed, Bleeding Through, Born From pain, Shattered Realm, Narziss, Deadlock, Atreyu, 25 Ta Life, Most Precious Blood...just to name few.which can ring the bell. This band feels good in small club as well as on big stage...That´s why they also get opportunity to play famous festivals such us, HELLFIRE FESTIVAL (2003) or SUCK'N SUMMER FEST (2005) where they were unexpectable one of the best live bands!!! After a lots of shows in 2004 they found new friends in the band CROWLEY'S PASION and decided to do a split release on Deadbutcher Records. The split CD is called „assassins of oblivion“. On this split you can describe their music as a tough /metal/moshcore, mix of Arkangel, Hatebreed or All OUt War… Well, after a long songwriting and production phases their newest full-length CD "Weeping of angels" (Deadbutcher rec. 2005 ) is ready to kick you as well! Because album "Weeping of angels" will blow you away with precise ala "Slayer" guitar riffing and non-compromise heavy mosh parts in the veins of Born From Pain or Maroon! Trust me, with a new drummer are ACTION more brutal and technical at any time before! The "chemistry" in ACTION is so far the best and with their new style are capable of anything! So, be prepared for their killing live set...when no one will save his ass in kickbox pit!:-)